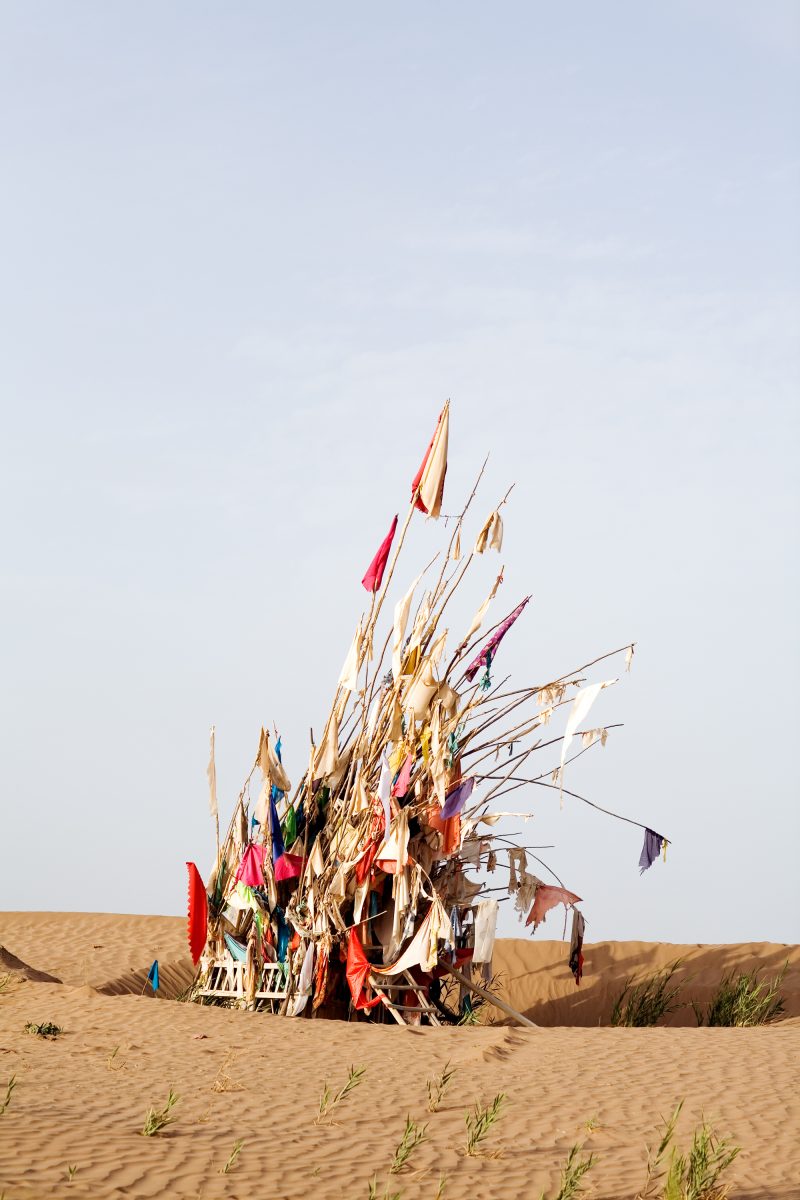 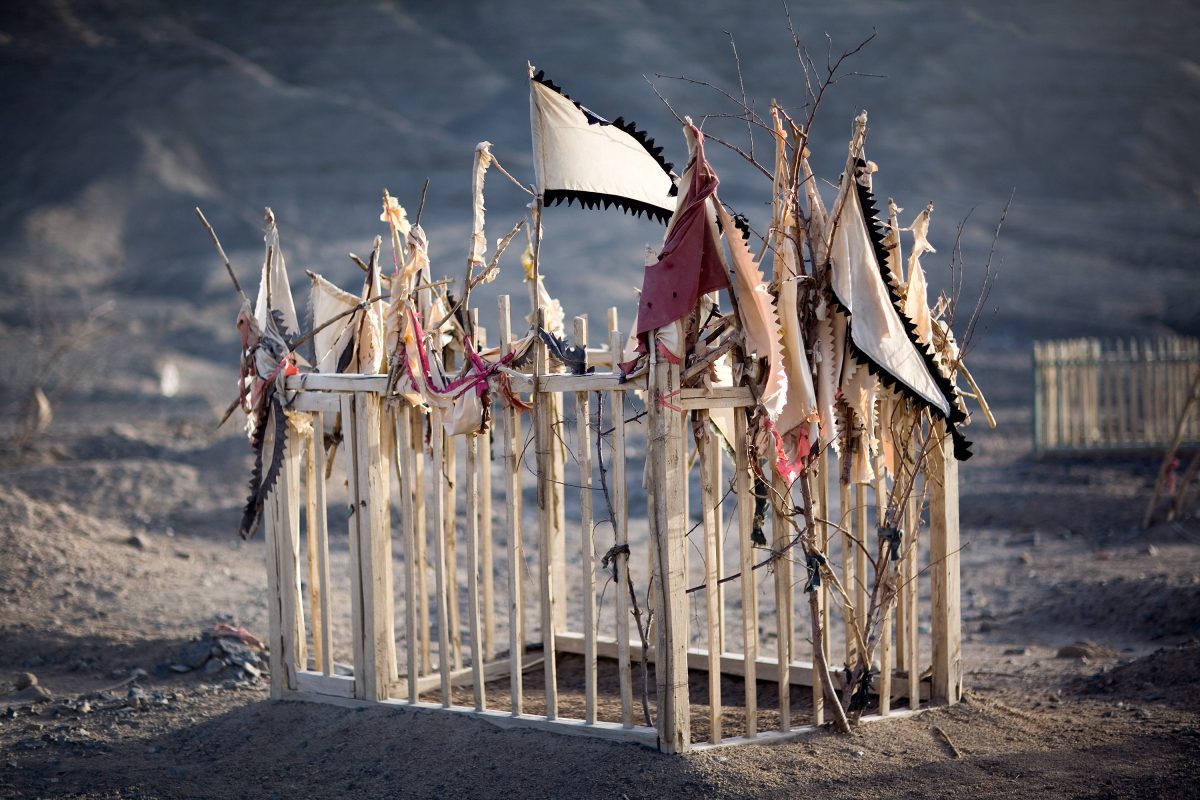 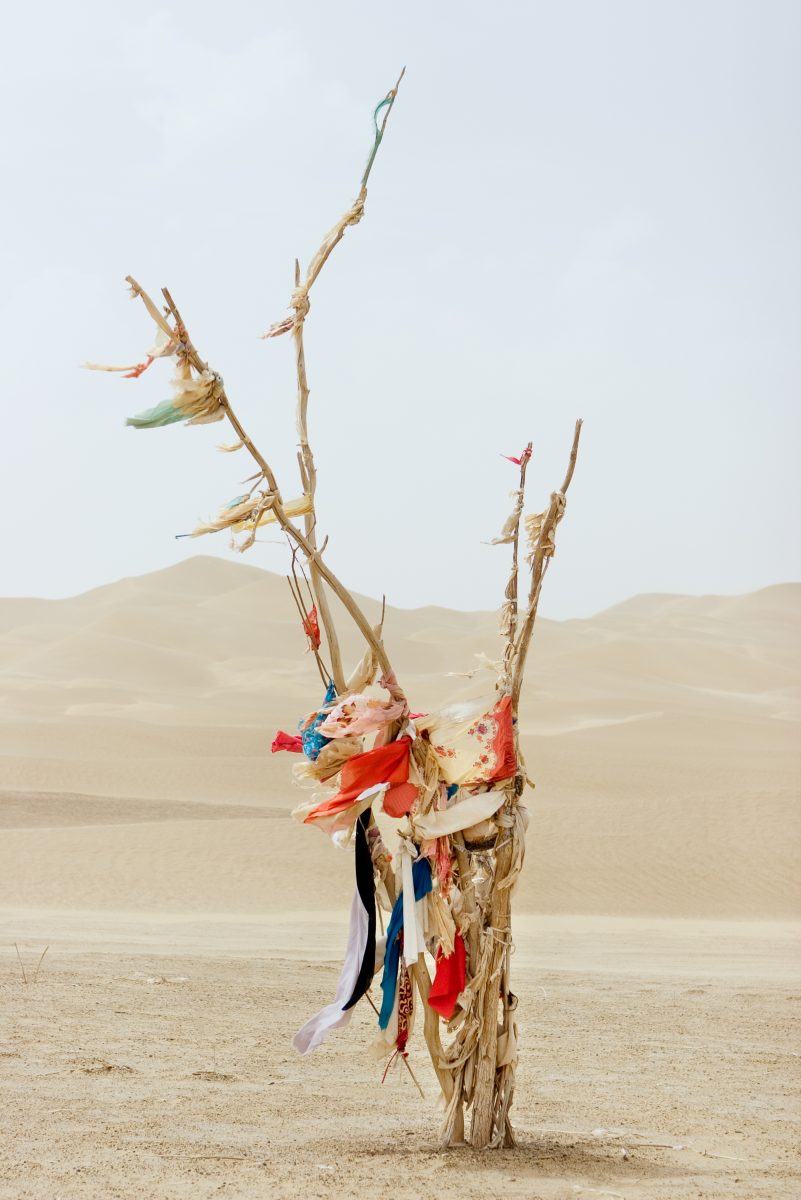 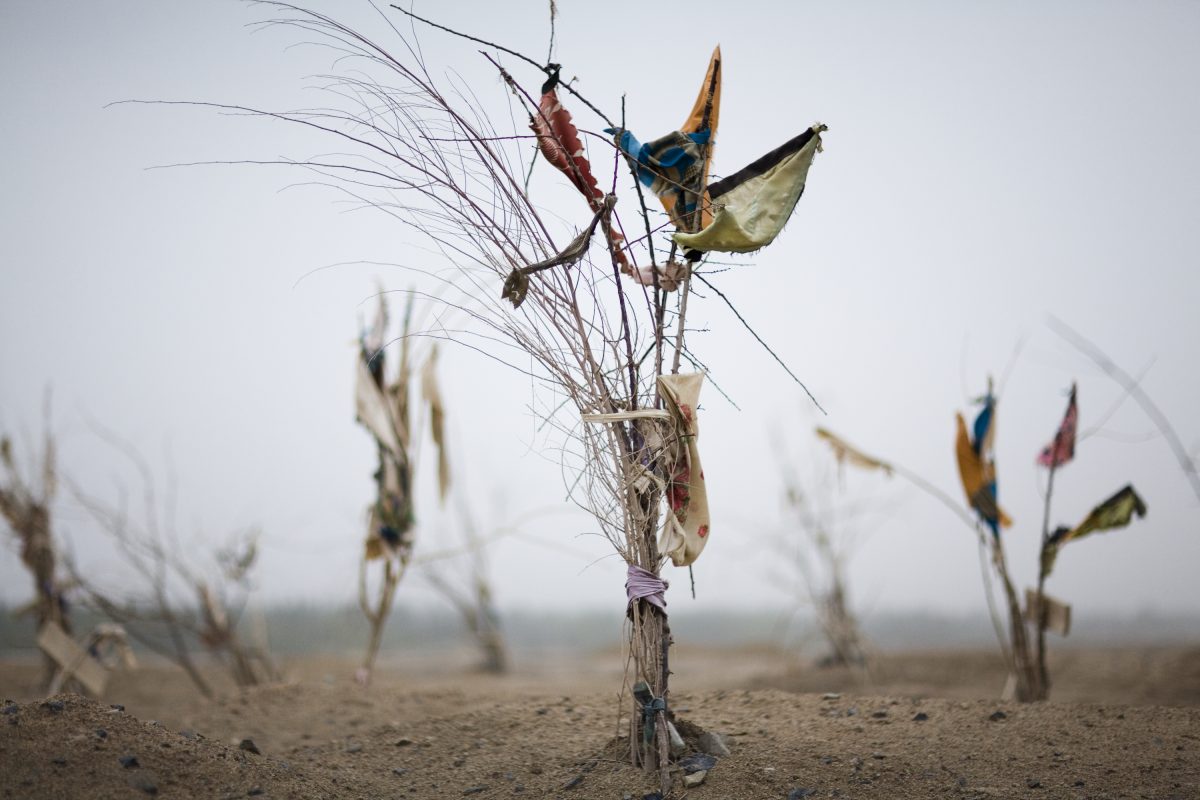 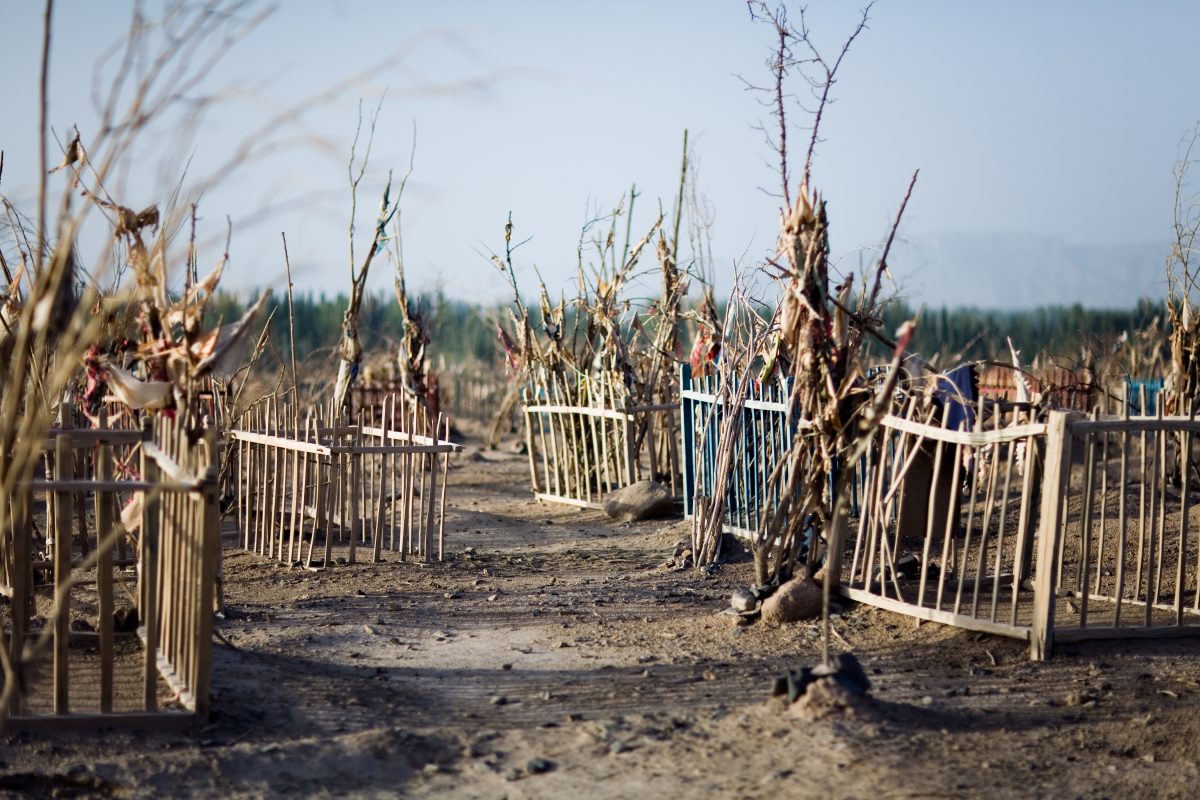 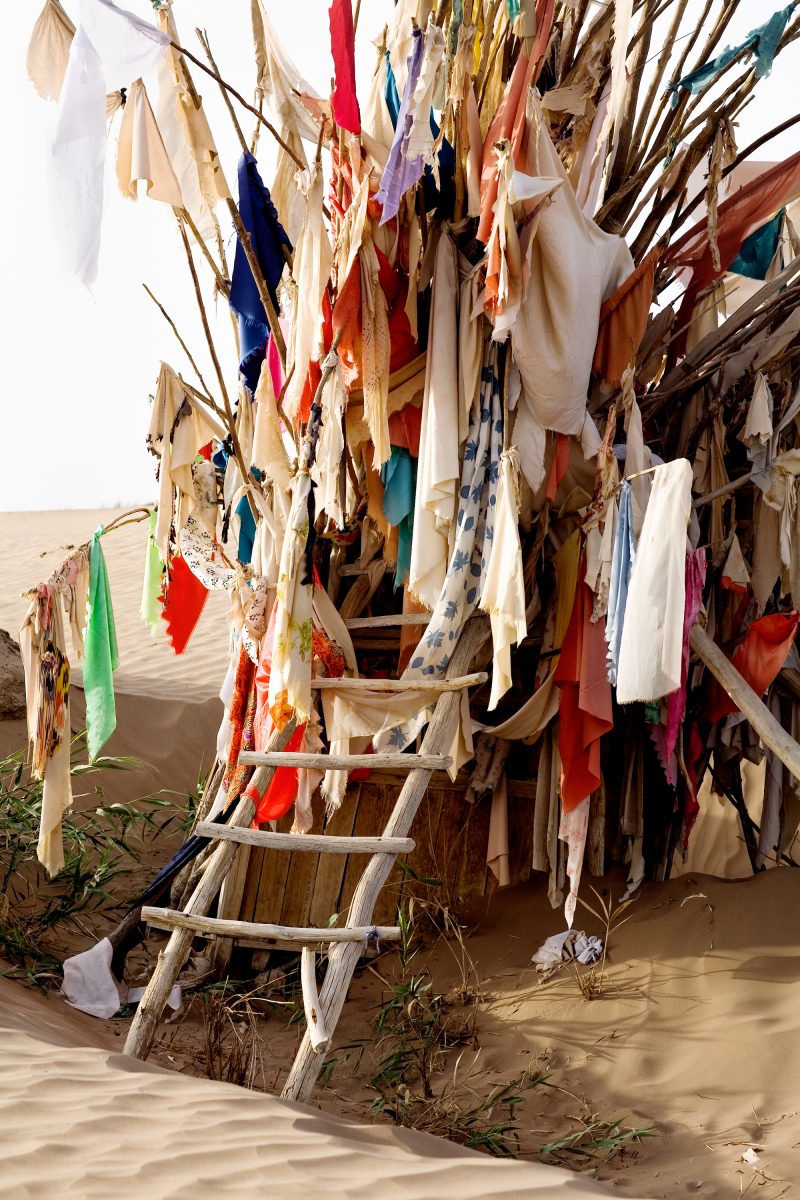 Since 2002 New York based artist Lisa Ross travelled to the Taklamakan Desert in Xinjiang, western China to photograph the holy sites of its indigenous Muslim Uyghur population.  Dotted throughout the bland, sparse landscape were humble shrines constructed from bare tree branches, twigs and sticks staked vertically in the ground, their only adornment brightly coloured scraps of cloth. For centuries these shrines (mazârs) had been sites of pilgrimages by the Sufis, followers of the mystical form of Islam, who would leave small devotional offerings as a gesture of their worship. These sacred markers, whether burial sites of Sufi saints or points of convergence for worshippers to communicate personal prayers, were the manifestation of ancient, spiritual ritual where thousands of Uyghur Muslims would come seeking healing, fertility and absolution.

Through careful framing against backdrops of expanses of pale earth and wide sky, Ross elevates these simple constructions from their modest existence to that of gracious and dignified monuments.  Focusing her lens on the clusters of wind whipped flag-staffs with their elegant rods reaching for the heavens, she reveals these fragile memorials as both delicate and resilient against the harsh environment; their tenuous existence a poignant expression of the universal qualities of courage and fortitude.

The spiritual strength of these sites is revealed through simplicity of content and composition combined with the exquisite clarity with which Ross captures their form and radiant colours that, together, invoke an aura of solitude and meditation, elation and rapture.

However, the pure beauty of Ross’s photographs belie a political injustice suffered by the Uyghur Muslims.  This exhibition draws on Ross’s extensive body of work Living Shrines and is being re-presented at an acute time in global history where systematic campaigns of ethnic and religious oppression are widespread.

Over the course of her visits to Xinjiang, Ross has witnessed the escalating repression of a whole Muslim population by the Chinese authorities under the pretext of containing religious extremism.  Historically the Uyghurs have had a fraught relationship with the Chinese government and any attempts to resist coercion and control have been violently crushed. In recent months the intimidation has been intensifying and it has been reported that as many as 1.5 million Uyghur Muslims have been involuntarily sent to internment camps and that hundreds, if not thousands, of mosques and sacred sites such as these photographed by Ross, have been razed to the ground.

Following the purposeful destruction of this rich culture Ross comments “This exhibition is extremely important to me particularly at this moment in time. It’s both heart-breaking and shocking that the sites have been destroyed and the people forcibly removed in front of our eyes, despite international outcry.”

Now that these sacred sites no longer exist and access to this region is strictly controlled, Ross’s photographs have taken on a particular significance as cultural documents of a lost, or more specifically eradicated, religious practice.  Moreover, and perhaps more importantly, for Ross the act of having photographed these lost sites and resolutely re-exhibiting the photographs, serves as an act of defiant support.

Lisa Ross is an artist and photographer from New York, currently living and working in the Bronx.

Her work has received distinguished critical acclaim in international press including The New York Times, The New Yorker, Artforum, The Wall Street Journal, Le Figaro and The London Review of Books.  Her book ‘Living Shrines’ was published by The Monacelli Press, 2013.