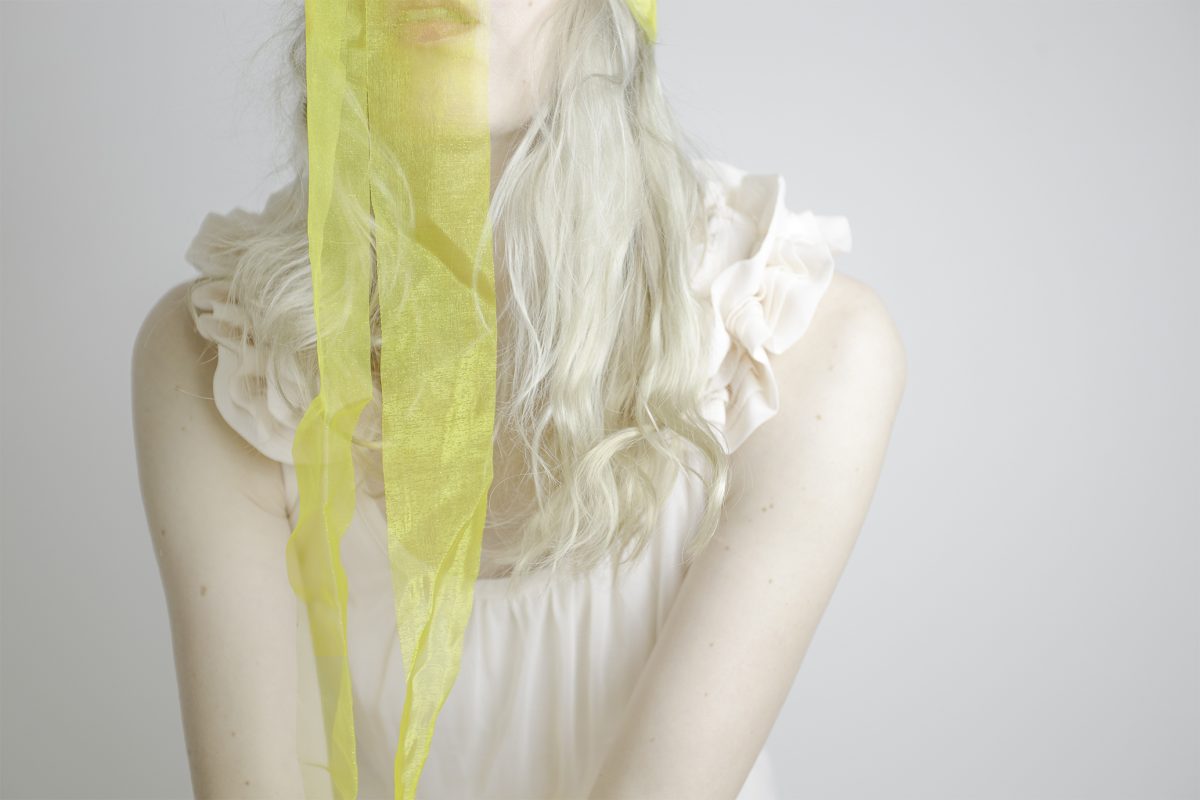 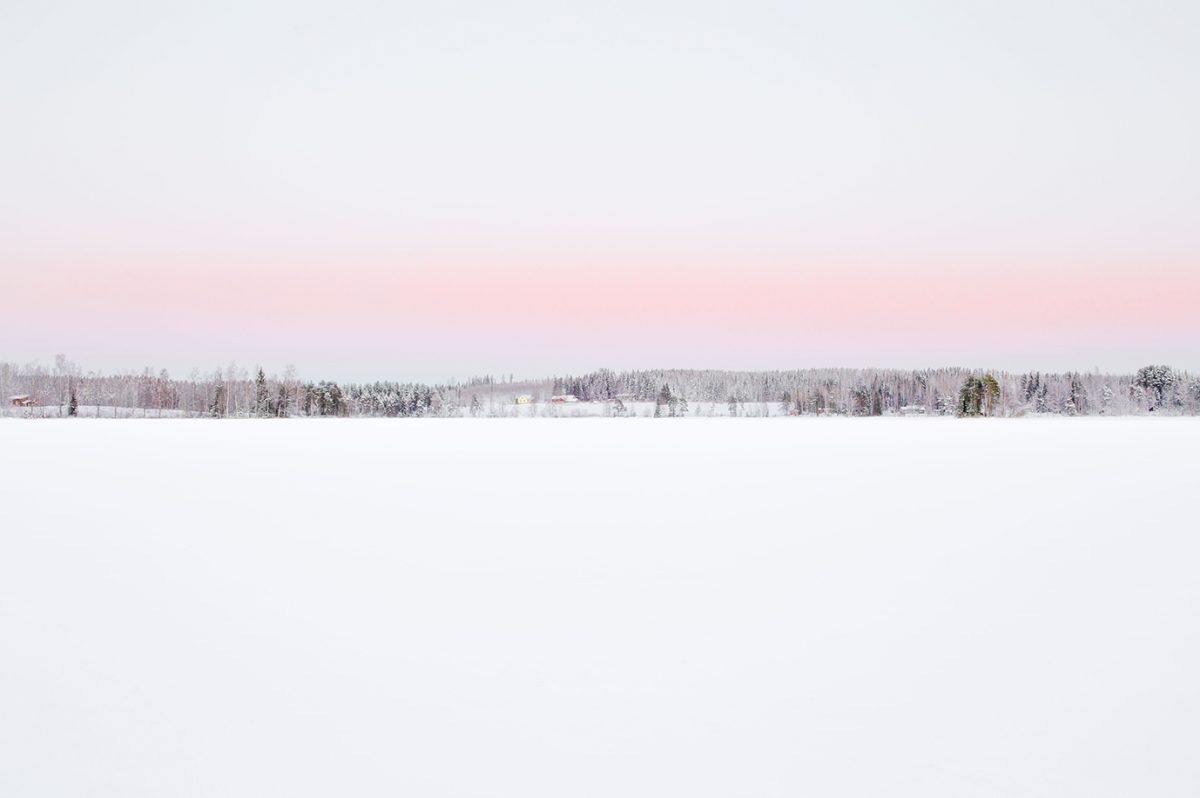 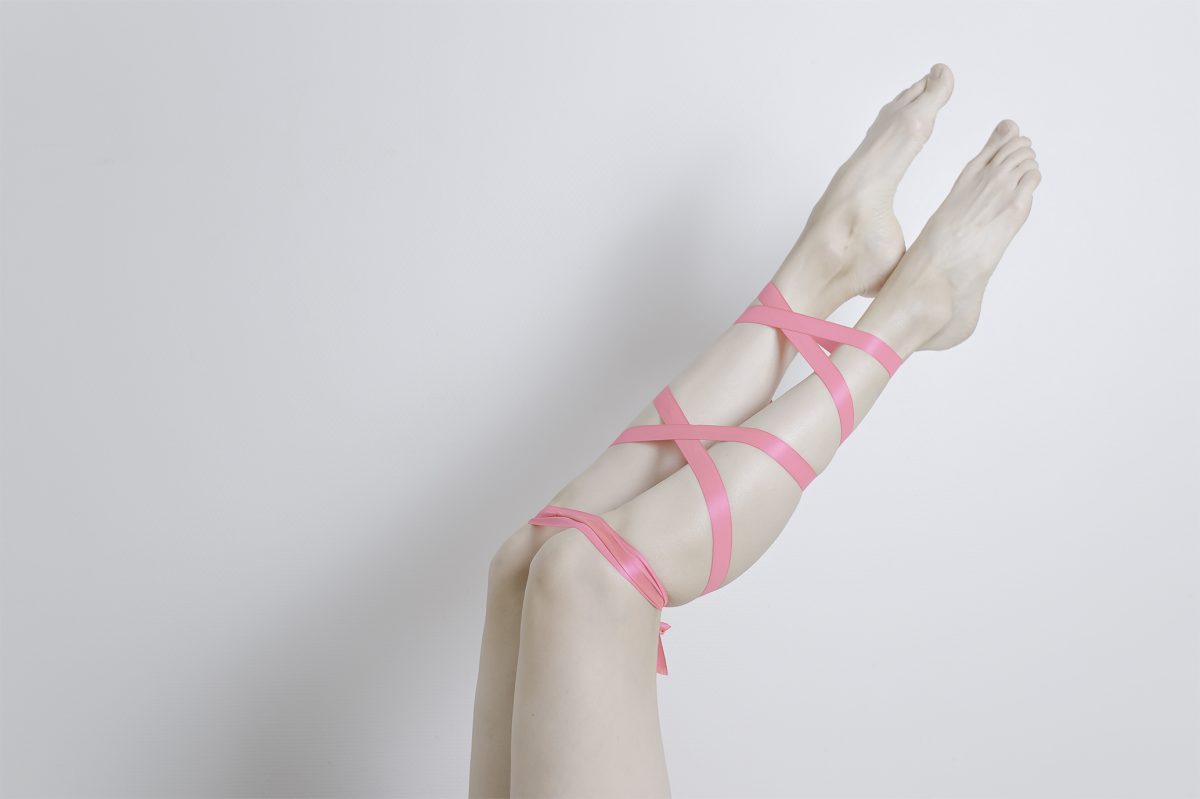 Interested in the invisible struggles everyone faces, Granholm’s work draws on her own personal experiences and explores intense psychological themes. Through her enigmatic self-portraits her work deals with themes of femininity and restraint, entanglement and the desire for freedom coupled with the fear of it.  Based on her own personal experiences the body plays a central role in her simple, uncomplicated compositions where the ribbon is used not only as a tether but also as a trope for harnessing the impulse to break free. The deliberate use of a soft pastel colour palette gives her images a fragile beauty and an unashamedly feminine aesthetic.

The works in this exhibition are taken from her series’ Hush and Twine.

The semi-autobiographical nature of her work is most apparent in Hush, an on-going project that deals with living a life in secret from which there seems to be no escape.  Sorrow and longing are interspersed with glimpses of hope and desire but the strength to break free is missing – always being drawn back and staying hidden.  Granholm admits “This decision to remain keeps me suppressed. I have been silenced, but I have also become the silence.”

Most of the images in Hush are self-portraits that show various parts of her body but never her face.  Images such as Porcelain (2019) use ribbons as an important motif for both harness and anguish, and address ideas of women being bound and living under the weight of expectation and demands.

Twine explores Granholm’s relationship to her homeland, in particular as a place of healing.  With a crispness of visual representation, soothing colour palette and fragile light, her elegant depiction of the landscape promotes the pursuit of harmony and self-renewal.  By minimising detail in favour of horizons and boundaries they are landscapes of a state of mind, evoking a connection between artist and place.

The large-scale compositions and awe-inspiring vistas also engage with the notion of landscape not as place but as space, as a symbol of freedom.  The vast open spaces create a compositional void that is suggestive of a meditative state of mind.

Each image is the result of a considered process where the emphasis is on communicating an emotional state that goes beyond the index of the photograph to ultimately create a metaphysical self-portrait.

Jenni Granholm (b.1979) is a photographic artist living and working in Tampere, Finland. She began her BA Photography at the College of Fine Arts (Sydney, Australia) and undertook her final year at Aalto University (Finland). In 2010 she gained her MA Digital Arts from Camberwell College of Arts, London.  Her work has been exhibited internationally in solo and group exhibitions in Australia, Russia, Finland, Northern Ireland and London. She has also had work published on the front cover of Neste Oil Magazine (Finland) for three successive years and was a featured artist on Aesthetica Magazine’s on-line platform.